The Canadian pension is working with an adviser on the potential sale of SeaCube, which could fetch about $1 billion including debt, according to people with knowledge of the plans. The company is expected to draw interest from suitors including infrastructure-focused investment firms and other pension funds, said the people, who asked not to be identified discussing a private matter.

An spokesperson for the pension declined to comment. A SeaCube representative didn’t immediately respond to a request for comment.

SeaCube, led by Chief Executive Officer Robert Sappio, is best known for refrigerated-container leasing and counts steamship lines among customers, its website shows. The Woodcliff Lake, New Jersey-based company is bullish on the future of refrigerated cargo amid global trends in food consumption, executives have said, citing increased importing of products such as fresh seafood and avocados to the U.S.

The Ontario pension purchased SeaCube in 2013 for $469.5 million. The pension said at the time that the deal was led by its long-term equities group, which seeks to make bets on companies with steady cash flow, growth potential over the long term and a low to moderate level of risk.

Dole plc, a newly created company formed for the combination of Total Produce plc and Dole Food Company, Inc., announced the pricing of its initial public offering of 25,000,000 ordinary…

Two dead after Israel-linked ship attacked off coast of Oman

Two crew members were killed when an oil products tanker with links to Israel came under attack off the coast of Oman.

The Drewry Container Port Throughput Indices are a series of volume growth/decline indices based on monthly throughput data for a sample of over 235 ports worldwide, representing over 75% of…

MSC Mediterranean Shipping Company (USA) Inc. has filed and will implement an adjustment to the below PSS with the following quantum and effective date for all shipments from the Middle… 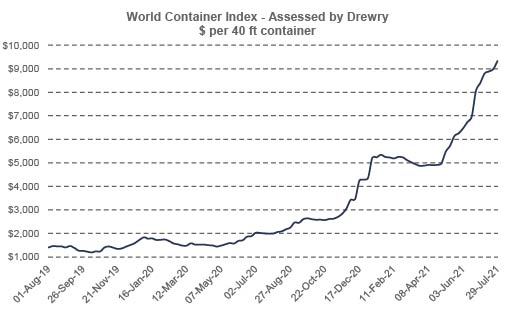